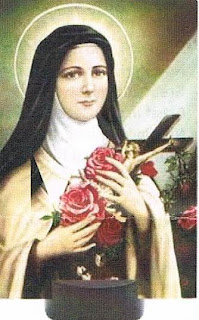 Rejoice! And that is what I have done on this glorious feast day of The Little Flower, Saint Therese of Lisieux. My heart rejoices!

I woke this morning filled with joy knowing I was going to 7:30 AM Mass with friends before the women's prayer breakfast. And just as I was about to walk out the door the phone rang.

On the other end of the line was my dear husband, my honeylamb. He had finished an hour of adoration in the hospital's chapel and was letting me know he left early this morning without enough gas in the car, his wallet (meaning money) and was afraid he would not be able to make it to the nearest gas station.

"Could you come help me?" he asked.

Stunned on the other end of the phone, my frustration rang out. "You're asking me to come...there? I'll miss Mass. I can't believe you're..."

"Never mind," he said and the phone clicked off.

Immediately realizing my ungracious response, I tried to dial him back. No answer. He had not taken his cell phone either.

It became crystal clear to me that I was to let go of my desire for Mass and offer up the sacrifice of helping my husband instead. That's my first vocation I reminded myself...I'll be blessed for that. And I sure won't feel good going to a prayer breakfast knowing I left him high and dry.

So off I drove in the opposite direction heading toward the gas station I figured he'd try to get to. Just a mile later (he had already traveled four miles) we passed each other on the road and did a quick turnaround so I could hand off some money and express a quick apology. He was glad to see me.

At 7:20 AM now I thought "Well, I can still make it to the church for part of the Mass." Praying for green lights I covered over eight miles in record time (it helped that it was a week-end with light traffic). I flew out of the car once I arrived at the church and dashed up the stairs into the chapel. Mass hadn't even started yet even though it was almost 7:35 AM at this point.  No sooner did I genuflect and scurry to my seat than the priest came out the door to begin Mass.

I had to chuckle with the sense of God's timing.

The whole experience multiplied my joy for the day. St. Therese, do you have something to do with how this worked out so well?

I just want to thank you today, Therese, for being such a good good friend! Now here's a rose from my garden back to you who bestows so many roses from heaven to earth! 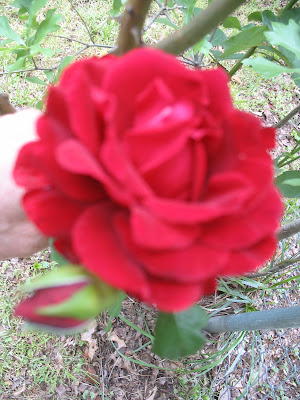 I love you!
Posted by becomingwomenofpeace.com at 8:27 PM