The grapevine wreath lay before me. Fresh eucalyptus branches oozed their scent permeating the air. Pruning shears clipped individual stems. Each one was placed strategically into the curved and twisted grapevine. Discards were thrown to the side ready to be disposed. I looked at the last discard and looked again. That was not trash.

There He was. Leaves formed His crown, his arms outstretched, even the wound in His side was visible. This nothing became something. Beyond proportions ever imagined the little piece of assumed waste became sacred. Something beyond was present. A lesson on the epitome of humility.


"Your attitude should be the same as that of Christ Jesus:
Who, being in very nature God, did not consider equality with God
something to be grasped, but made himself nothing,
taking the very nature of a servant,
being made in human likeness. Phil 2: 5-7 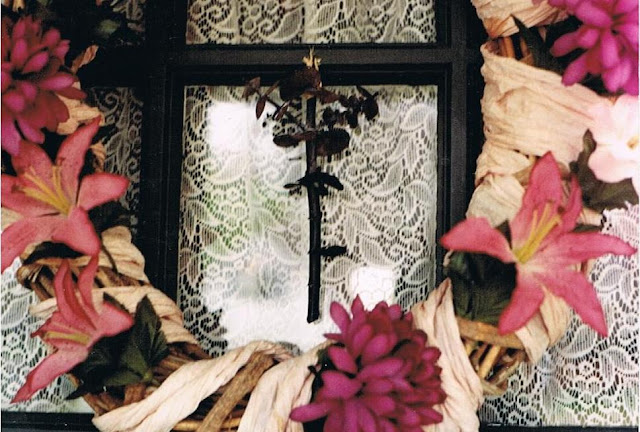 Weeks passed. While cleaning the window panes on the inside one Saturday I noticed a substance dripping from the eucalyptus cross. It spilled out over the ribbon and flowers on the wreath with streaks running down the door to the ground below.

"And being found in
appearance as a man,
he humbled himself and became obedient to death--
even death on a cross!" Phil 2:8

How could this substance cry out to me, "I died for you?"
Stunned, I fell to my knees.

"Therefore God exalted him
to the highest place
and gave him the name that
is above every name,
that at the name of Jesus every knee should bow,
in heaven and on earth and under the earth," Phil 2:9-10

The value of the little piece I was going to throw away took on monumental worth. When friends heard the story, lessons on the blood covenant were shared.

Years later it has its place of honor on our dining room buffet reminding me that something can be made of nothing. And especially that Jesus, Our Lord, humbled himself to the wood of the cross. 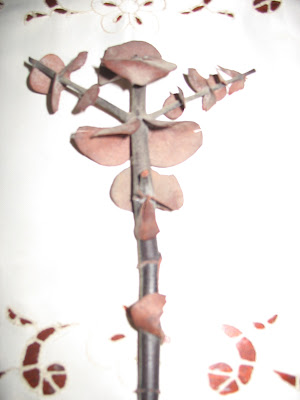 "and every tongue confess that
Jesus Christ is Lord,
to the glory of God the Father." Phil 2:11
Posted by becomingwomenofpeace.com at 12:08 AM