January 25, 2017 “Dear children! Today I am calling you to pray for peace: peace in human hearts, peace in the families and peace in the world. Satan is strong and wants to turn all of you against God, and to return you to everything that is human, and to destroy in the heart all feelings towards God and the things of God. You, little children, pray and fight against materialism, modernism and egoism, which the world offers to you. Little children, you decide for holiness and I, with my Son Jesus, intercede for you. Thank you for having responded to my call.”

My prayer in response: 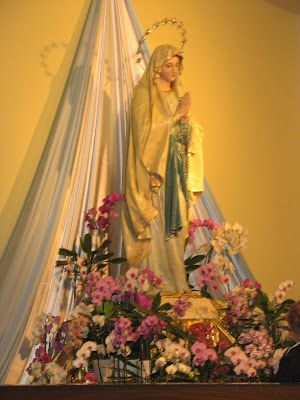 Dear Heavenly Mother of all children,
We hear you. We hear your cry for peace and we cry out with you for peace today. We know how real this need is as we look at our own countries and see the lack of peace. We see the hatred and violence more and more in our own communities and throughout the world. We see the need for peace in our own families which is where we really need to begin being people of peace who are foremost forgiving and patient and kind to those who share the same roof over our heads.
We pray for the peace that penetrates the core of our being, and for true compunction of heart that pierces to the quick.
Help us to remember "the weapon whose point is keen enough to penetrate the innermost depths of the soul." And as "St. Paul tells us there is 'a sword of the Spirit which is the word of God' (Eph. 6:17) 'For the word of God...is living and effectual, more piercing than any two-edged sword: reaching unto the division of soul and spirit, of the joints also and marrow.' "  Dom Germain Morin
Mother, you tell us Satan is trying to destroy us by turning all of us against God so give us, we pray, an increase in the graces to stand as warriors in this battle for holiness and follow the narrow way. Teach us to put on the full armor of God so we are able "to stand firm against the tactics of the devil" as Paul taught the Ephesians: "with our loins girded in truth, clothed in righteousness as a breastplate, and our feet shod in readiness with the gospel of peace...holding faith as a shield to quench the flaming arrows of the evil one...taking the helmet of salvation and the sword of the Spirit, which is the word of God."     Eph 6:10-17
Thank you for interceding for us, Mary Queen of Peace, and tell our dear Lord, your Son Jesus, how much we love him and thank him for interceding for us too. It is our great pleasure to be your children.

Sheila
Posted by becomingwomenofpeace.com at 12:58 PM No comments:

The Catholic Herald published this article today:
During his weekly address, the Pope said women like the biblical heroine Judith are an example of trusting God amid sufferings and difficulties when it is easy to give up hope and fall into despair.
“This is my opinion, but women are more courageous than men,” the Pope said to applause.
As the Pope arrived for the audience, the sounds of classical music echoed throughout the Paul VI audience hall as a youth orchestra from Bolivia played for the Pope.
Pope Francis focused his audience talk on Judith, “a woman of great beauty and wisdom,” who reproached the people of Israel for their lack of trust in God to deliver them from foreign invaders.
“They were at the point of saying, ‘God has sold us,'” the Pope said. “How many times have we come to situations that test our limits where we are not even able to trust in the Lord? It is an ugly temptation.”
Facing a situation full of despair, the Pope continued, the people gave God five days to intervene. However, even in prayer they doubted that the Lord would help them.
“Five days are given to God to intervene – this is the sin! Five days of waiting but already expecting the end. In reality, no one among the people is capable of hoping,” he said.
Pope Francis said that in the moment of despair, Judith confronts the people’s doubts with the “courageous language” of faith and hope.
Her courage, he explained, is a reminder for Christians “to knock on the door of God’s heart; he is a father, he can save us. This widow risks (everything), even of making herself look like a fool in front of the others. But she is courageous, she goes forward.”
Christians must “never put conditions on God,” the Pope said. Instead, they should allow “hope to conquer our fears.”
“To trust God means entering into his plans without assuming anything” and to believe that “he knows better than us,” the Pope said.
The story of Judith exemplifies the importance of the “courageous counsel” of humble women, Pope Francis said. Their words, he added, contain “the wisdom of God” and should never be “dismissed as ignorant.”
“The words of grandmothers – how many times do grandmothers know the right word to say,” the Pope said. “They give words of hope because they have the experience of life, they have suffered so much, they trusted in God and the Lord gave them this gift of giving us hopeful advice.”

I pray that we can be women pregnant with hope, and bear it in this world of ours that often despairs and falls into the temptation of believing that You, O Lord, will not help us when we are most in need. Hear our cry, O Prince of Peace. Yours is the Gospel of peace, not of despair.  In the midst of our brokenness come to our aid as we trust in you, as Judith encouraged the people of Israel to do in the midst of their desire to be delivered from their enemies.

Give us, O Lord, the grace to be courageous women who, no matter what pain or sorrow, suffering or difficulties we face, move forward and choose to rise up in hope instead of falling into despair. Open our ears to the call to a challenging "war effort". In the words of my own beautiful and courageous mother who passed from this earth, "our weapons are our collective voices of reassurance to our children, grandchildren, and all who have lost hope for the future..." Give us voices to speak.


I pray we have perseverance to keep knocking on the door of Your heart, O Loving Father. You know best and can save us.

Posted by becomingwomenofpeace.com at 12:59 PM No comments:

A thousand broken pieces scattered and thrown.
What is this miraculous force that seems to reassemble and
the masterpiece becomes even more beautiful and visible?

The love that was scarred and hidden comes to light and there you are again.

You, O Heavenly One, can orchestrate and devise the most ingenious plans.
Way above what I could ever imagine.

Yes, we die a thousand deaths and through some supernatural recreation, we are transformed. I die in your arms. Reaching out to you with a mouth that can hardly speak, but you know how to read the language of the soul that longs to be one with the eternal flow. So I keep giving myself to you again and again and I never fear that you hear, and are near, for you have proved your love time after time.

I hear a melody that resounds so sweetly and harmoniously within and I am dancing in the wind of your spirit.

Twirl me round and round in our dance of love.