In January of 2002, leaders of various faiths and widely differing beliefs gathered to pray for peace. What an unusual sight to see representatives of the world's major religions--Hindus, Buddhists, Jews, Muslims, Catholics, Protestants and Orthodox Christians--sitting side by side in the same sanctuary of a Catholic cathedral in Tulsa, Oklahoma. 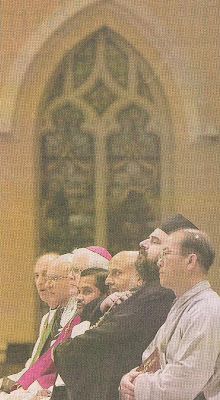 Upon the request of the late Pope John Paul II, Roman Catholic Bishop Edward J. Slattery called the leaders together. "We're here because we believe in the possibility of peace," he said. Each leader was given about seven minutes to pray for peace according to their own tradition.

Rev. William Christ, pastor of Holy Trinity Greek Orthodox Church, said, "We're always looking outside ourselves to make peace. If we want to transform the world, we must start by looking at ourselves. Only when we find peace within ourselves can we expect peace to come about in others." He quoted St. Seraphim who said, "Acquire the spirit of peace, and thousands around you will be saved."

Archaka Swamy Venugopal Swamy Gattu, priest of the Hindu Temple, chanted Hindu scripture that listed sins to be avoided--pride, envy, gluttony, lust, avarice, sloth--and the virtues to cultivate--righteousness and truth-speaking. He instructed his listeners to "try to cultivate love in your heart; a man without love is lifeless. If you find someone who is suffering, make all effort to give him solace."

Nguyen Van Hoa, from the Buddhist Temple, simply removed his shoes and stood in silence which spoke volumes, then chanted with the sounds of a bell and small drum.

Rev. Floyd Schoenhals, representing the Evangelical Lutheran Church, said Jesus Christ is the fulfillment of the promise of peace on Earth. Jesus' gospel of peace, he said, heals broken relationships and creates a new humanity. The promise is for the reconciliation of all things in Christ.

Rabbi Howard Schwartz, prayed a prayer he learned in Hebrew as a youth, asking God to make Israel a messenger to the people of the world and the United States a stronghold of peace and advocate of peace to the nations.

Bishop Slattery said there can be no peace without justice and no justice without the forgiveness demonstrated by Christ, who forgave those who crucified him.

Clergy members came forward at the end of the service to sign a commitment to become instruments of peace.

Wouldn't it be wonderful if we all committed to becoming instruments of peace?