Do you love adventures like I do? They can be so fun, but they can also be scary--like rock climbing, rappelling, mountaineering, skiing black diamonds, or camping and hiking in bear country--the ones that really challenge you physically. I'd like to share with you a story, "Path of Statues"--an adventure I had that helped me overcome some fears in my life.

"God has not given us a spirit of fear, but of power, charity, and a sound mind," 2 Tim 1:7--a scripture verse that I speak often to help myself and others overcome fear whether it be physical, psychological, emotional, or spiritual. A woman of peace must learn to face her fears and overcome them. For those of you that live in other countries, especially war-torn ones, you may face the greatest threats of all to your sense of safety and security, but perhaps this little story will still reassure you.

While on a retreat at the Abbey of Gethsemani,
my uncle, a monk, suggested
that while he helped in the kitchen,
I take a walk along the "path of statues"
that Brother Rene had created.

"Wonderful!" I thought, "I want to see what he has done."
Of course, then another thought crossed my mind,
"Is it safe?" knowing that I would be alone.

But, I wouldn't admit that question to him.
After all, I was a grown woman now,
not a child or even young woman
as I had been years before when I visited.
Surely I had overcome my fears since then.

"Walk first through the garden

next to the monastery guest house,
onto the blacktop road, until you get to the wooden gate,
then simply cross the highway, and you'll see the path,"
his instructions rang out.

I envisioned a short jaunt just off the highway. After all,
these were huge life-size statues
and how would they be able to transport them very far?

Over the highway I crossed that wet August morning

about 7:30 AM.
"I'm really pretty isolated," I realized at this time of morning.
The beginning of the path was not very inviting--
gushy mud puddles, but onward, I plodded...up into the grassy slopes.
Quickly it became windy--turning this corner and that,
with a thickening forest of trees.

There was that question again.
"How safe is it for a woman to be on this path alone?"
My mind was telling me, "Be brave!"--my emotions,
I hate to admit it, "I'm afraid."

It was too early yet to make a decision to turn back,
so I thought I'd see what was around the next bend...
and the next bend.
Surely those statues would be visible any time.

Traversing hills up and down, round and round,
across bridges and then
real trouble--spider webs. You know what that means.
I was the first to venture out that morning.
And I hate spiders, but not only that--
"What if someone--some creepy woodsman
hung out there last night?"


I'd read scary stories before--my sister lives
near the forest areas in Montana
and terrible things have happened to people--
kidnapping, murders, bear attacks,
"Stop! Mind over matter," I thought,
I am not giving in to my fears."

I can always out run someone who tries to get me," I reasoned--
(after all I had on running shoes).
Timidly I came upon a clearing next to a big pond, and then
a steep flight of stairs leading to another level.
Bigger trouble now.
"It's going to be increasingly difficult to outrun anyone...
and I could fall and break..."

Frozen in an intense moment of a prevailing question--
"should I turn around now or go on?"
"I can not give in to my fears," I thought--
"this could be a great story--
if I live to tell it."

Up the steps, around more bends--
surely those statues are going to be...
but, the path was narrowing--trees still thickening--
isolation overtaking me--heart rate increasing
and no one would even hear me scream now. ..if I needed to.
I was too far from civilization.

"Ok, this just isn't prudent--after all--
prudence is a virtue," I reasoned,
"I'll just go and find someone to come back with me later."
But my mind wouldn't let my emotions control me.
"Where is your faith?" I questioned.


"Holy angels protect me," I commanded and trudged on.
Finally I came to a large statue, though not life-size--
of St. Francis of Assisi.
"Intercede for me," I begged. 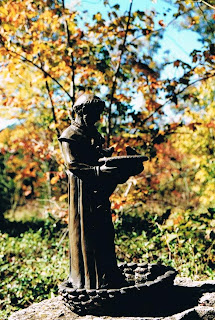 With my nearsighted vision, I thought I was now seeing

my fear manifest before me--
a person in the distance...but as I approached
it was only a statue of a black Madonna.
"O, I am so sorry, dear Lady, that I was afraid of you."


The signs, "path of statues" kept pointing on.
Surrender. At least I would die on holy ground
if that was my fate.
A small wooden shack loomed--
just the place a creepy woodsman could hide--
with a flag hanging on the door frame
like someone could be staying inside.
I peered inside from a distance--no one was there--thank God!

"My brother, I am your sister," is what I figured I'd say to someone
if they suddenly appeared.
The dense Kentucky forest opened onto a wide field now
and across a meadow I was scampering. 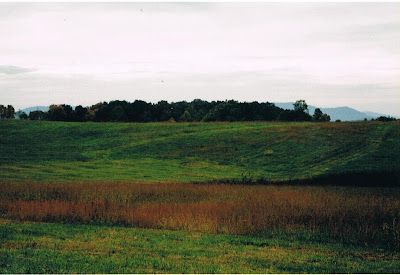 My uncle, the priest, the father figure who protects,
I trusted he would never send me anywhere unsafe,
but I was wondering.

I crossed the meadow which led to yet another forest of trees.
I was committed though, determined.
And then, there it was--the first life-size statue before me--
of the disciples lying down.
"That's me!"--exhausted with fear, I mused. 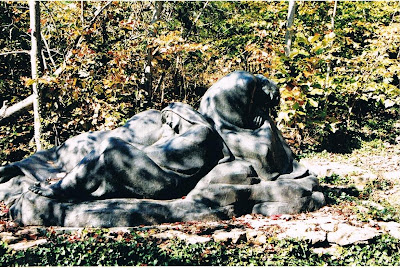 Around the corner, the next statue and very fitting--
Jesus was kneeling with his hands on his head in desperation
My very sentiment, "O God have mercy," seemed to emanate. 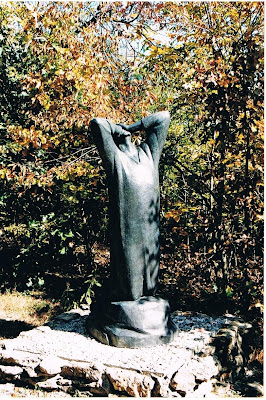 Strangely enough, there was never a clear ending to the path--
I came upon a cross, some rosaries, more flowers--
a hint that some life had been there recently, but
with no more signs pointing the way
I turned and headed back--quickly, and was never the same.

I was very happy that day--after I returned safely--that I had not given in to my fears. With God's help I faced and overcame them. And so my prayer for you today, my friend, is that whatever fears you may have within you, may be faced and overcome with the help of God's grace for he has given us the power and courage and sound mind to do so.

Abundant peace to you,
Sheila
Posted by becomingwomenofpeace.com at 4:50 PM