Good morning on this bitterly cold day in Oklahoma. The news is reporting that another 100 year record was broken with temperatures at -28 in one of the cities and -11 right here in Tulsa overnight. No wonder many of us slept in our stocking caps. As a "blogger" I am literally and figuratively warming up since this is only the beginning of the second week of this blog site.

I'd like to share with you some excerpts from the book, The Genius of Women, because it is a foundational teaching of Becoming Women of Peace.

This whole concept of "Genius of Women" grabbed my attention in the year 2000 when I attended a Women's Conference at Franciscan University in Steubeville, Ohio. Patricia Donohue, professor at the university, shared about it.

It's based on this little book which contains the
statements and messages of the late Pope John Paul II
written in 1995 which was the Year of the Woman.
Mary Ann Glendon, Professor of Law at Harvard University, at that time stated on the back of the book, "This pope has reflected more deeply than any of his predecessors on the role of women and men as 'partners in the mystery of redemption.'"

When John Paul II speaks about "genius" he is referring
to how "woman is endowed with a particular capacity for
accepting the human being in his concrete form."

"Let us look at the Blessed Virgin example," he said. "In
the narrative of the wedding at Cana, John's Gospel
offers us a vivid detail of her personality when it tells us
how, in the busy atmosphere of a wedding feast, she
alone realized that the wine was about to run out. And to
avoid the spouses' joy becoming embarrassment and
awkwardness, she did not hesitate to ask Jesus for his
first miracle. This is the "genius" of the woman!" he said.

So that's a concrete example of what he meant by "genius" of women" lived out in daily life.

Then he went on to say, "May Mary's thoughtful sensitivity,
totally feminine and maternal, be the ideal mirror of all
true femininity and motherhood!"

Amen, I say to that. We are so blessed as women to have this intuitive kind of sensitivity. Let us give thanks for the way we have been created. 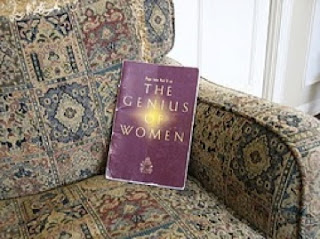 I hope whenever you live you are staying warm both in your home and heart.

Peace be with you, dear friends,
Sheila
Posted by becomingwomenofpeace.com at 11:34 AM