At the 1976 International Eucharistic Congress, I had the opportunity to hear Mother Teresa speak to the people gathered in Philadelphia, Pennsylvania. Her simple yet profound way of speaking had a powerful effect on me. The words she spoke still echo within me today almost thirty-five years later.

"The poorest of the poor are often in our own homes," she exclaimed. Those were prophetic words for me. Instead of joining her Missionaries of Charity in Calcutta, I realized I didn't have to go far away; there was plenty to do where I was.

"A smile is the beginning of peace," she used to say. 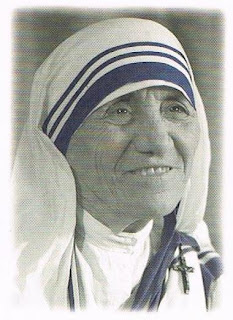 Mother Teresa didn't have to say much. God spoke through her and the words had life.

My vocation became teaching children with special needs who had severe and profound disabilities. Once I worked at a school where we served little birth through three years of age. They couldn't talk, walk, or feed themselves. A boy named Matthew had a profound effect on my life. He lived what Mother Teresa taught. Every morning he would crawl into my classroom from an adjoining room...crawl because his legs were too deformed to walk. Using his upper body strength, looking a bit like a mermaid from the rear, he grinned ear to ear and said, "Good morning!"

"If I can't wake up with a smile and a cheery attitude, then I have a problem," I'd think to myself. Even to this day, I see his face clearly. Now I can't get the smile off my face.

"A smile is the beginning of peace." And peace is the way.
Posted by becomingwomenofpeace.com at 1:40 PM