Early one August morning, my husband, a priest friend and I went walking briskly along a street in Fatima, Portugal, a pilgrimage site. There laying on the side of the road was a branch of a tree. Knowing my father was back home and using a cane, I thought of him. Despite the fact that it was over four feet long, I was determined to get it home on the airplanes and have it carved into a special staff for him.

It felt a little awkward carrying that branch through the airports on the way back, and especially onto the planes hoping I could find a place to put it. Fortunately, each airborne leg of the journey had a place where it could be stored.

In September, after settling back home, I eagerly called a wood carver--an acquaintance--to ask if she could carve the stick so I could give it to my father for his birthday in December. When I left it at her house she told me, "Get back with me about what you want me to carve on it."

Months passed. I hadn't called her back yet. Finally, in November when I did, she said, "It's finished!"

"Finished?" I questioned. But I hadn't even informed her what to carve. Somewhat apprehensive, I hastened to see what she had done. She presented me with a transformed stick, now a glowing staff and said she was impressed to carve acorns and oak leaves on it. 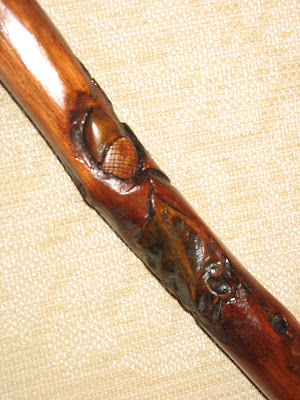 Acorns. How did she know? Acorns were significant in the story of the shepherd children of Fatima who saw Our Lady. After the first apparition when the three children would leave home to go take care of the sheep, the littlest one, Jacinta, became very concerned about doing as Our Lady had instructed them, "Pray the rosary and make sacrifices for the conversion of sinners." She began to desire to give her lunch to poor children she saw begging.

After getting hungry herself, Jacinta decided to eat the bitter acorns from the oak trees nearby, for the conversion of sinners. Acorns. 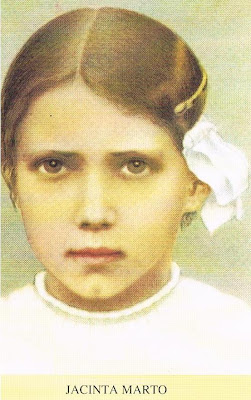 My acquaintance carved acorns and didn't even know, had never heard the story before. But the Spirit moved her, inspired her and there was the walking staff before me with that unique symbol of sacrifice--an offering for the conversion of other souls.
St. Paul wrote, "I am filling up what is lacking in the afflictions of Christ, in my flesh, for His body, which is the church." Col. 1:24

A seven-year old child could make such sacrifices. Surely, I could too. A transforming message was carved in my heart that day. One I will carry with me the rest of my life.

Peace to all on earth,
Sheila
Posted by becomingwomenofpeace.com at 3:05 PM