Women of the Tomb 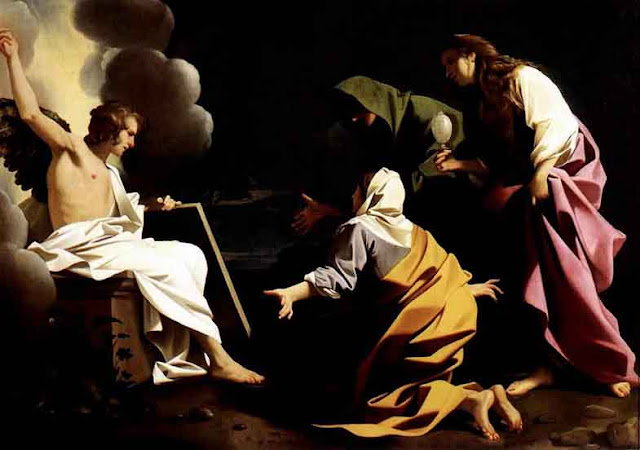 The women at the tomb were women of peace. Notice in the passage below it says they were half-overjoyed and half-fearful. How often do we find ourselves feeling the same way? Yet they did not let their emotions rule them; rather they went and did as they were instructed by the Lord.

Women who listen to the word of God and put it into practice are certainly ones who are becoming women of peace.

"After the sabbath, as the first day of the week was dawning,
Mary Magdalene came with the other Mary
to inspect the tomb.

Suddenly there was a mighty earthquake
as the angel of the Lord descended from heaven.
He came to the stone,
rolled it back,
and sat on it.

In appearance he resembled a flash of lightning
while his garments were as dazzling as snow.

The guards grew paralyzed with fear of him
and fell down like dead men.

Then the angel spoke, addressing the women:
"'Do not be frightened.
I know you are looking for Jesus the crucified,
but he is not here.
He has been raised,
exactly as he promised.
Come and see the place where he was laid.
Then go quickly and tell his disciples:
'He has been raised from the dead
and now goes ahead of you to Galilee,
where you will see him again.'
That is the message I have for you."

They hurried away from the tomb half-overjoyed, half-fearful,
and ran to carry the good news to his disciples.

Suddenly, without warning,
Jesus stood before then and said,
"Peace!"

The women came up
and embraced his feet
and did him homage.

At this Jesus said to them,
"Do not be afraid!
Go and carry the good news to my brothers
that they are to go to Galilee,
where they will see me." Mt 28: 1-10

Jesus was revolutionary. He brought about a paradigm shift in thinking about women. He was friends with them and treated them with dignity, value and equality. His actions were radical for his time and culture. He taught women the Gospel and they became his disciples. He said, "My mother and brothers are those who hear God's word and put it into practice." Lk 8:21 Brothers, of course, being a generic term applying to both men and women, or all members of the same covenant and not blood brothers.

What determines intimate relationship with Him is attentiveness to and regard for God's word. Jesus commissioned these women of the tomb to "go and tell" His brothers to go to Galilee where they would see Him...again. He confirmed women's public responsibility. Ministry is about knowing Him and making Him known.

May we go forth in the power of the Spirit; the same power that raised Jesus from the dead, and tell the good news--the Gospel of peace.

Love in Christ Jesus,
our Risen Lord,
Sheila
Posted by becomingwomenofpeace.com at 11:10 AM